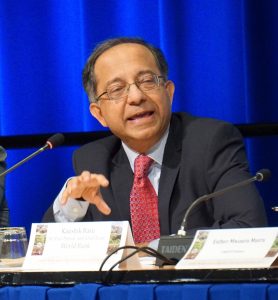 Kaushik Basu is a Professor of Economics and C. Marks Professor of International Studies at Cornell University, USA. He has served as the Chief Economist and Senior Vice-President of the World Bank, and Chief Economic Advisor to the Government of India. A Fellow of the Econometric Society, he is the recipient of several honours and awards, including the Padma Bhusan, which is one of the highest civilian awards by the Government of India. Professor Basu’s contributions span development economics, welfare economics, industrial organization and game theory. In addition to Cornell, he has taught at the Delhi School of Economics, Harvard, Princeton and MIT. He has written several books including ‘Beyond the Invisible Hand: Groundwork for a New Economics’ (Princeton University Press and Penguin); and ‘An Economist in the Real World: The Art of Policymaking in India’ (MIT Press). He has received honorary doctorates from several institutes, including IIT, Mumbai; Fordham University, New York and Bath University, UK. Professor Basu is currently President of the International Economic Association.